I’ve had a couple of days to digest the primaries on June 7th. My stomach is still upset. I knew things were bad in this country. I knew wealth inequality was at levels not seen since the Gilded Age. I knew that our government had been bought and paid for by the oligarchy and I knew that it would be a long term struggle to reclaim it on behalf of the people. What I didn’t quite realize yet was how deeply, in the media, and in local, state and national government the rot had penetrated.

I’m going to talk about how the media completely ignored Bernie Sanders until it was obvious he was building a movement and how they then saturated the airwaves with he has no chance of winning despite his winning state after state. I’m going to talk about the media ignoring the massive and ongoing voter fraud that has been perpetuated in this primary. So let’s start with exit polling.

Exit polling is done extremely well. Exit polling is used by our own State Department and the UN to monitor elections for fraud in third world countries. If exit polls are off by more than two to four percent, the election is considered invalid due to fraud. That’s 2% to 4%. Got that? Take a look at this graphic and the election polling results for the democratic primary in several states: 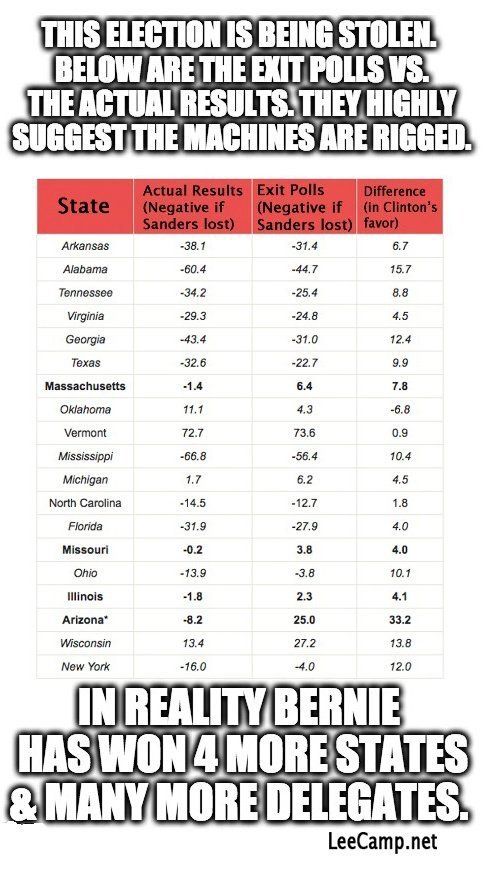 Look at the differences in election polls and actual vote counts, and how off they are in favor of Clinton. And by the way, this is hardly the only graphic that shows this, but you do have to dig a bit because the mainstream media is ignoring this. How could they ignore this you might wonder? Well, when it became increasingly obvious that in the United States of America, one of the two major parties was running an election that would be thrown out as fraudulent by our own State Department, the mainstream media just up and declared they would not longer be using exit polling because they were “unreliable”. So what’s good enough to call into question elections in other countries is too unreliable for our stand up democracy. Huh.

But here’s the kicker. They decided to quit exit polling before California. Before the state with so many delegates up for grabs it could change the trajectory of the race, in spite of the clear voter fraud happening in previous races. Because if the exit polling was off by large margins in California more people would sit up and take notice. So we got no exit polling in California. And even though pre-election polling showed Sanders and Clinton in a statistical tie, she “won” handily. And we have no exit polling to compare with vote totals.

Now lets talk voter suppression. From the constant barrage of Bernie will never win, Clinton is inevitable, coming from every single pundit on every single media platform including those same pundits calling a Clinton win the second polls closed, but waiting until 70, 80, 90% of the vote was in to call for Bernie even when he was winning a state by landslide margin; to adding super delegate totals to the pledged delegate total to make it look like Clinton had an insurmountable lead, even though super delegates do not vote until the convention and only if needed; to massive poll closures in important states that restricted where people could vote and causing hours long lines that many people just couldn’t wait in due to work and other commitments; to thousands and thousands of lifelong Democrats as well as newly registered Democrats getting to the polls and being told they either weren’t registered or weren’t registered as a Democrats so they could only vote provisionally, meaning their votes ended up in the dumpster; the suppression is obvious and would be called out in any truly functioning democracy.

But the  overripe cherry on this putrid primary season was the AP announcing the night before California and 5 other states voted that Clinton had clinched the nomination and was the Democratic Party nominee. Clinton did not have the pledged delegates needed when this announcement was made. The AP called the race based on phone calls they made to super delegates who confirmed their commitment to Clinton. So they outright lied to the electorate in order to suppress turnout. So now the entire media narrative is Clinton is the nominee, Bernie needs to exit gracefully and all the party bigwigs including President Obama and Elizabeth Warren have endorsed her.

There is only one major player who has not announced Hillary Clinton as the nominee and that is the DNC. In spite of claiming neutrality during the primary Debbie Wasserman-Schulz, the chairman of the DNC, has been doing everything in her power to stack the deck in favor of Clinton. Why would she not jump on that bandwagon now? Because according to the party’s own rules, unless a candidate has 2,383 pledged delegates (Clinton does not) they are not the nominee. Super delegates do not count until they vote at the convention. Their loyalties can and do switch for any number of reasons. That is why Bernie is taking this all the way to the convention. Clinton is not yet the nominee according to the DNC’s own rules. Bernie supporters, by the way, aren’t sitting around wishing for “unicorns and rainbows” in the form of the super delegates moving over to him en masse. They are establishment and will stay with Clinton, that much has been made clear. But Bernie’s movement deserves time and attention at the convention and we are grateful he’s still willing to fight for us.

But for me, the most disheartening thing about this whole business is how many Americans are willing to ignore and overlook the subjugation of our democracy because it benefits their candidate. These are the same people who act all appalled at the Republican’s voter suppression tactics through highly restrictive Voter ID laws that impact the poor, elderly, minorities and young people disproportionately and who just happen to vote Democrat by wide margins. But the very real, verifiable and egregious voter fraud and suppression happening in their own primary and it’s crickets. Do they not understand that if this kind of corruption is allowed to stand, it could very well be their candidate who is screwed next time around? Do they not understand that they are no better than the Republicans they vilify? Do they not understand? Or do they only care about democracy when it works in their favor?

Bernie Sander’s movement will continue well beyond this election in spite of the powers that be working diligently to make sure he doesn’t have a platform to return this country to one that works for all Americans. In point of fact, their fraud has made sure of that.