Some hilarious cartoons that fit in perfectly with my series Dallas vs. Ebola and my post Media and the Politics of Fear

First from Jack Ohman, editorial cartoonist of the Sacramento Bee::

And this from Jim Morin, editorial cartoonist of the Miami Herald:

And from Jeff Darcy of the Cleveland Plain Dealer: 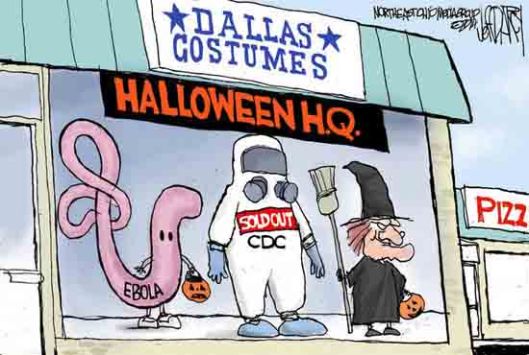 Finally, from Bill Bramhall of the New York Daily News:

The UT Dallas School of Arts and Humanities is showing a production of Tragedy: A Tragedy  which I attended last night. The play is a comic satire written by Will Eno and directed by Thomas Riccio.

Will Eno is an American playwright based in Brooklyn, New York. His plays have been produced in New York City, Off-Broadway and by regional and European theaters[1]. Tragedy: A Tragedy received its world premier in April 2001 at the Gate Theater in London. His other works include Thom Pain (based on nothing), The Flu Season, Middletown, and The Realistic Jones, which just completed its run on Broadway[2].

Thomas Riccio is a professor of performance at UTD, writer, director, and performance creator. He is Poo Pah Doo of Dead White Zombies, a Dallas-based performance group. Riccio works extensively in the area of indigenous performance, ritual, and shamanism, developing performance and/or fieldwork in South Africa, Zambia, Kenya, Burkina Faso, Tanzania, Russia, Alaska, Korea, China, Vientam, and the Republic of Sakha (Siberia), which declared him a “Cultural Hero”[2].

Tragedy: A Tragedy is a deeply relevant piece on the relentless vacuity and absurdity of the modern media. While this play was in rehearsals before the Ebola “outbreak” here in Dallas, media coverage of that incident is a perfect example of the banal hysteria over something that may be nothing that Will Eno satirizes.

The play is set in a newsroom with the news desk taking center stage. Both sides of the stage feature field reporters with large screens behind them showing their “locations”. They also utilize audience spaces off stage to the left, right and front for location reports. Part of the cast are actual cameramen who film the field reports which show on the large screen behind the news anchor and more crisply on a TV set into the wall to the anchor’s left. It is an effective use of technology in not only creating a realistic news room and remote locations, but also making the audience more visibly aware of the always present camera man who we rarely see or hear, but who is instead a silent witness to the inanities, and the portal through which those inanities make it into our living rooms.

This is not a play that you can watch and turn off your brain. In other words, it’s not mindless entertainment. You will have to pay attention to not only keep up with, but understand what is (or isn’t) unfolding in front of you. Satire is not easy to pull off and I believe there are some people in the world who just don’t have the imagination to understand it. Everything is literal to them. Those people will not understand this play. Will Eno gets satire right in his writing and I found the dialogue to be fun and interesting and thought provoking. Acting satire may be even harder than writing it. I’m not positive on that point as I’m not an actor, but it makes sense intuitively. The cast is a mix of student actors and experienced actors and teachers and it shows. Satire, especially dark satire, can be very funny, making us laugh in the midst of our discomfort and becoming ever more hilarious the darker it gets. This was very uneven in the performances, with the less experienced actors not quite getting across the humor of the spiraling out of control darkness. However, there were a couple of standouts in the performances and all of my laugh out loud moments came from them.

Brad Hennigan played Frank in the Studio, or the anchor man. (Full disclosure, Brad is my brother). Last year Brad directed UT Dallas’ production of Book of Days. He is an adjunct professor of theatre for the Art and Performance Program and is a co-founder of the critically-acclaimed experimental group Dead White Zombies. He has worked locally at the Dallas Theater Center, Dallas Shakespeare Festival and Deep Ellum Theater Garage; and in Los Angeles at Sacred Fools Theatre and Attic Theatre[2]. Brad really nailed the news anchor persona. Vain, shallow and self-importantly and blandly nattering on and on without really saying anything, uninterested in the location reporters until it was time to throw to one of them. His then self-important and frantically fearful on-air implosion as the tragedy unfolds and he has no one left to natter at, or natter back to him, is one of the funniest performances of the play.

Michael Cleveland plays Michael, Legal Advisor, the ever present “legal expert” on any news show. Michael is a graduate student in Arts and Technology. He co-runs the IB theater program in the School of Performing Arts at Garland High School. He is also an associate artist with Dead White Zombies[2]. Michael the reporter roamed to different locations throughout the play, unlike the other two field reporters who stayed at one location. It was Michael’s responsibility to read statements from the Governor during the night but rather than reading them he became the persona of the Governor during his statements, to good effect, both while the Governor was still governing and as he succumbed to the crisis of night. Michael, being the legal expert began the play as buttoned up as you might imagine a legal expert to be and his unraveling is the most extreme of all the characters. The more tightly wound, the more extreme the unraveling.

The other actors were not terrible, just as I said not as able to bring out the humor in their dialogue the darker it got. I’m not sure if this is a failure of direction, lack of talent or probably more likely a lack of life experience, but it does not make the play unwatchable and this is a production within a university theater department which is a teaching environment.

There were no technology glitches that were noticeable and no noticeable moments of actors forgetting their lines. Every actor had long monologues of word twisting, mind-bending, even weird dialogue and I’m always amazed at their ability to memorize it. Satire should should be short, sweet and on point and this play delivers with a brisk 75 minute run time. The play finishes it’s run tomorrow night (Saturday, October 11) so there are only two more performances. If you are looking for something interesting, different and thought-provoking to do this weekend, Tragedy: A Tragedy is worth checking out.

In my original post Dallas vs. Ebola I pointed out the panic I was noticing over the fact that Ebola was in Dallas, as well as my observation that I believed Dallas and it’s people are more than capable of handling the situation. In my next post Media and The Politics of Fear I pointed out the fear-mongering of much of the media and my absolute disgust with that. Well I’m happy to report that not all of the media is engaging in the insanity. Check out the below segment of the Colbert Report as Stephen Colbert, in his usual hilarious manner, mocks the fear-mongering media with about as much disgust as I’ve ever seen peek through his “persona”. You’ll have to scroll down mid-page in the article to find the clip: The Colbert Report clip

If you are willing to dig a little, look past the mainstream media and be open-minded you can still find good reporting and truth in the media. It is a bit disconcerting that two satire shows, The Colbert Report and The Daily Show are my go to places for truth in the news. However, a study by Pew Research shows those two show’s viewers rank first in knowledge of national and international affairs while Fox News viewer rank last.  That said, if you get all of your news from one or two sources you are probably not getting the full picture. Always, always, always, get as much information from as many sources as you can before you take anything you hear as gospel.