I’ve been thinking a lot about the state of the U.S. since the mid-term elections. Well, if I’m honest since way before the elections. And if I’m honest, I’m having a hard time being optimistic. Of understanding what people are thinking and why. Why there is either rabid, angry, ugly discourse from some and complete apathy from others. How is it that people are so lacking in sympathy, let alone empathy, toward fellow human beings.

Why people will vote against their own self interests just so that they can be seen as better than those “others”. How science and education became dirty words, academia seen as nothing but “liberal” ideology. Conservative states like Texas actually changing history in textbooks to gloss over what they would rather have people not know, advocating NOT teaching critical thinking skills in their party platforms, to keep the populace stupid and uninformed. Politicians repeatedly stating, “I’m not a scientist, but I believe climate change is a hoax” to keep the oil, gas and coal industries happy and raking in the billions, while 97% of scientists are raising ever more strident alarms. Demonizing low income workers as lazy and uneducated (just the way they like them) and refusing to raise the minimum wage to something even remotely livable while working feverishly to cut food stamps for children, the elderly and veterans. Propagating “patriotism” and “love for country” and “supporting our troops” to make it seem ok to fight never ending wars that make the rich ever richer all while making more veterans they can refuse to do right by. Bailing out banksters and their banks to the tune of billions of dollars, refusing to prosecute even one of the rich SOB’s who tanked the global economy, causing millions of people to lose their retirement funds, their homes, their jobs, their hope, while those few get ever richer hoarding and sitting on trillions of dollars. How one family, the Walmart heirs (6 people) own more wealth than the bottom 40% of Americans (120 million people) yet they claim they cannot afford to pay a living wage or give full time work to their employees and rely on the government to provide aid to 70% of their workers all while working towards taking that aid away. And the Waltons are just one example, the Koch brothers another, of the 0.01% who have more money than they could possibly ever spend who diligently work toward keeping the masses poor and hungry and uneducated, and fighting amongst each other so they won’t realize the real problem has nothing to do with they deserve it because they worked hard but that the playing field was so ridiculously slanted in their favor. Pay equality for women still a pipe dream, a “pro-life” agenda that is really only “pro-birth” that is only about regulating a woman’s choices, not allowing her to make her own decisions and because once you are born to that poor woman who was unable to access needed reproductive healthcare or able to afford birth control so she could plan her family and who works 2 or 3 jobs at minimum wage and who can barely pay the rent and put food on the table, too bad, so sad, you should have been born into a “better” family. 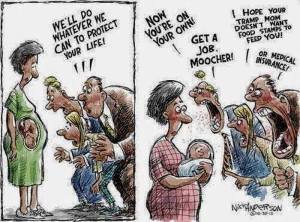 Colleges and universities operating for profit, graduating students with so much student debt they have to live at home with their parents, putting off marriage and home buying and families they can’t afford with a collective debt load in the trillions making the mortgage crisis look like a walk in the park, but hey the rich are getting richer.

A militarized police force that murders with impunity, especially those of color, that pepper sprays, tear gases and arrests peaceful protestors, criminalizing our constitutional right to peaceful assembly, legally confiscating anything they “claim” might come from “drug” activity without having to prove that, to the tune of billions of dollars stolen from law-abiding citizens. And the corporate media, bought and paid for by the wealthy, disseminating fear and mistrust and false outrage, keeping focus on what the oligarchy wants while ignoring what they don’t. I could go on and on and on. And while both political parties are complicit in many of the laws that have allowed such a massive and unprecedented gap in income inequality, conservatives, the Republican party are by far the drivers of most of the above. And they were voted back into control of both houses of congress because people either voted against their own interests, buying into the horse shit arguments that they are better than all those “others” and they have the right to decide how huge swaths of people live their lives and believing that “conservative” values and Republicans will make sure “they” are taken care of, or because they were too apathetic to go to the polls and let their voices be heard and so made sure they would stay stuck. It boggles my mind. But hey, as long as there’s American Idol and CSI and the Bachelor and the Kardashians and sports to watch on TV and new shoes and TV’s and cars to go into debt purchasing and church to go to so they can learn to judge who “deserves” what and why and when because they’re “good”, they put money in the collection basket and donate to charity during the holidays, smug in their white, middle-class, privilege not noticing as even that is slipping away. 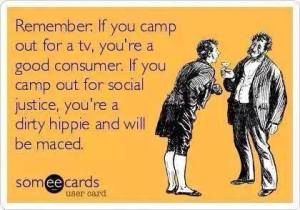